How does an ICD work?

How does an ICD work? 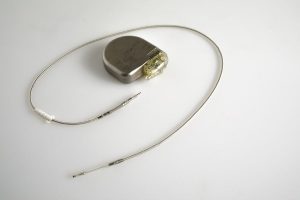 An ICD is a device which can deliver therapies, being either shocks or high-rate stimulations of the heart, for interrupting life-threatening ventricular arrhythmias. In addition, transvenous defibrillators have cardiac stimulation capabilities the same as a pacemaker.

An ICD consists of

An ICD constantly monitors the spontaneous electrical activity of the heart and, according to very precise settings, may have to deliver treatment in the event of an arrhythmia. The treatments offered by a defibrillator can be either to accelerate the heart rate above the rate of the arrhythmia to interrupt it, or to deliver an electrical shock (electric current delivered between the box and the defibrillating lead which is in the right ventricle or under the skin) which interrupts the arrhythmia. In addition, transvenous defibrillators have cardiac stimulation capabilities the same as a pacemaker: anti-bradycardia pacing and/or resynchronization therapy.